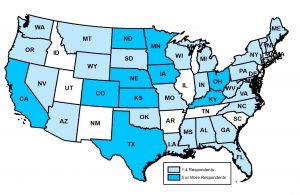 As America’s transportation workforce continues to age, there is an increased need to invest in workforce development to combat the impending retirement tsunami. This is especially true within the small urban and rural transit industry. A literature review showed that 63 percent of U.S. transit workers are 45 years of age or older, and that significant job growth will occur during the next 10 years in both urban and rural communities.

A national survey of rural transit managers was conducted to determine current workforce development practices as well as succession planning procedures. Viable responses were received from 160 agencies in 40 states. The majority of transit agency managers responding to the survey have been employed by their agency for more than 15 years while 75% of total respondents were 50 years of age or older. One-third of respondents indicated they plan to retire within the next 5 years while only 15% have any viable succession plan in place to combat such high management turnover.

Details of succession plans varied considerably. Many respondents mentioned mentoring and one-on-one training as succession plan examples while others have current staff members designated to work with incoming management to familiarize them with agency rules and processes. Also concerning was that only 40% of respondents indicated having any type of employee recognition program in place. To improve employee morale and advancement opportunities from within, transit agencies must take the time to develop feasible succession plans and make an effort to reward employees for outstanding performance.