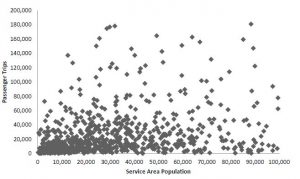 The objective of this study is to develop a model for estimating demand for rural demand-response transit services for the general public. Lack of data for demand-response service characteristics and geographic coverage has limited the development of such models. This study developed two models for estimating demand. The first used data from the 2013 rural National Transit Database, and the second used more detailed service data collected from surveys of transit agencies. Results showed that in addition to total population, demographic characteristics are important. Ridership was found to significantly increase when the percentage of the population comprised of older adults or people without access to a vehicle increased. Both models showed a negative effect of fares on ridership. The second model analyzed the impacts of service span and reservation requirements on ridership. Results showed that providing more days of service had an expected positive impact on ridership, while allowing users to reserve rides on shorter notice also had a significant positive effect. Compared to previous research, including a greater number of variables and more specific service information improved the performance of the models.