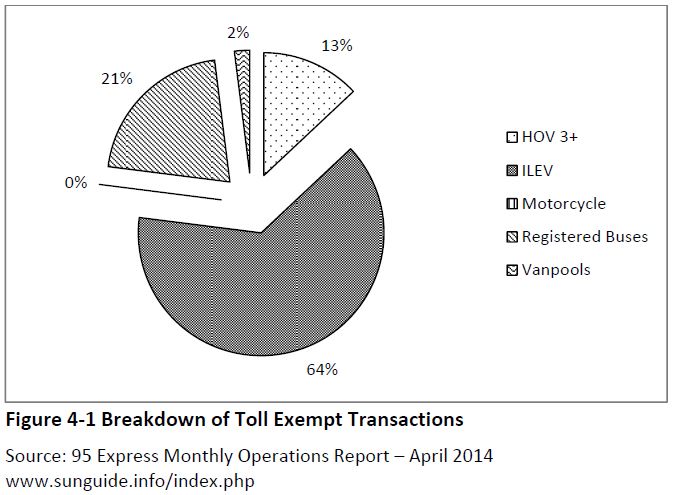 This research involved a simulation comparing three days of actual traffic data for the I-95 Express Lanes and General Purpose Lanes in Miami, Florida to a hypothetical scenario where all transportation demand management (TDM) activities and toll exemptions were eliminated. The purpose of the research was to quantify the extent to which carpooling, vanpooling, and transit usage contribute to better traffic flow in the I-95 corridor. The express lane analysis revealed a slight degradation in level of service (LOS) and a moderate increase in tolls in the southbound direction (+$0.41). It revealed a slight improvement in LOS and a slight decrease in tolls in the northbound direction (-$0.19). A phenomenon that occurred was that a large number of inherently low emission vehicles (ILEVs), which are toll exempt, opted out of the express lanes in the hypothetical scenario. The increase in express lane volume from former carpoolers, vanpoolers, and transit riders reverting to single occupant status was often offset by even larger volumes of ILEVs leaving the express lanes. Although the traffic impact to the express lanes was mild, the impact to the general purpose lanes was more severe. In the hypothetical scenario, the general purpose lanes operated at LOS F 22 percent more of time in the southbound direction and 8 percent more of the time in the northbound direction. Furthermore, the traffic densities in the general purpose lanes increased 100 percent of the time in the southbound direction and 94 percent of the time in the northbound direction.