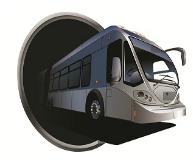 The goal of this project was to continue consistent collection and reporting of data on the performance and costs of alternatively fueled public transit vehicles in the U.S. transit fleet in order to keep the Bus Fuels Fleet Evaluation Tool (BuFFeT; © University of South Florida) cost model current. Researchers attempted to collect data from fixed route agencies inside and outside of Florida. While enough data was collected to represent the majority of Florida’s fixed route fleet, no data could be obtained from non-Florida transit agencies. Researchers also requested data for both fixed route and paratransit vehicles. However, due to the low response rate and reporting inconsistency for demand response vehicles, the extent and reliability of the paratransit fleet analysis was limited and should be interpreted with caution.

Separately from the data collection and analysis, project goals also included activities related to the preparation of a National Alternative Fuel Bus Clearinghouse. Researchers coordinated with APTA leadership and industry stakeholders to establish and maintain the clearinghouse, and implemented a website for information dissemination about alternative fuel transit technologies.