Moving the Bus Safely Back Into Traffic Phase II 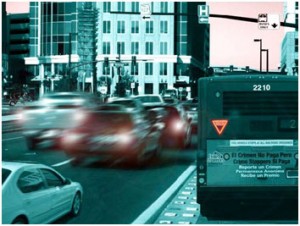 (Center Identification Number: 77910) The difficulty experienced by transit buses in moving back into traffic safely from bus pullout bays has become a serious problem due to potential hazards between buses merging from the pullout bays and the surrounding traffic. Previous studies have determined the need to closely examine the engineering side of the Yield-to-Bus (YTB) program and develop effective countermeasures to address the issue. This study focused on the assessment of the safety and operational effects of the use of Yield-to-Bus Light Emitting Diode (YTB-LED) signs on the back of the buses. Two off-the-shelf YTB-LED signs were tested against the decal‐only treatment currently used on the majority of the buses. The signs were tested in different roadway conditions. It was found that the YTB-LED signs have a positive effect in the yielding behavior of motorists without posing traffic safety issues. In addition to the YTB-LED signs testing, two transit agencies outside Florida were interviewed to obtain details regarding their YTB programs and educational campaigns. It was found that the main strategy used in their campaigns was ads on the back of the buses. One of the agencies suggested that proper YTB campaign evaluation is a key factor to ensure its continuity. Download the final report.